Here’s a funny little realization I had on the connection between a classic Nintendo game  and my writing.

In the olden times, when we weren’t fighting off the dinosaurs or gathering brush to feed the fires in our caves, every spare moment we had not fighting off said-dinosaurs or gathering said-kindling, was spent hunched around the fire, or better yet the 8-bit Nintendo Entertainment System. (Most caves, oddly, had electricity!). And one of the most popular games on the NES was “Mike Tyson’s Punchout!” 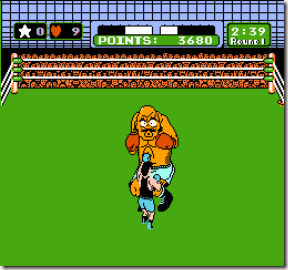 Now, my younger self had pretty good reflexes. But still, it was hard, (hard!) to beat the tougher and tougher opponents you faced in the game. Sure, Glass Joe was easy. Then you work your way up to Don Flamenco, King Hippo and finally—the main event—Mike Tyson himself. Tyson seemed IMPOSSIBLE to beat at first. But luckily, you had your coach, the trusty Doc Louis, who between rounds would give you valuable boxing advice. And his most golden advice of all?

So what in the hell does this have to do with writing?

In this metaphor, the writer is the human-player/boxer and the reader is the opposing (computer) boxer. And what I’m trying to do is “stick” the reader with…let’s say…some detail for the setting (Bam!). And then some swift character development (Bam!). Then, I “move.” I move along the plot, an action occurs and the narrative goes forward. Then, back on the attack. I “stick” the reader with a little insight into a character’s motivation (maybe they slip up and utter something they didn’t mean to). Bam! Then, I stick again (maybe the other character asks them if they’re serious or only joking). And then it’s time to move the plot forward again (Maybe a rider appears on the horizon, but neither of them know who it is).

So, I’m constantly “sticking” the reader with little nibbles of setting, character development/backstory or world building. And then “moving” on by propelling the plot forward.

It might sound funny and it kind of is. But let me tell you there’s more than one writing session I’ve ended recently softly mumbling to myself:

…while the people around me in the café turn up the volume on their headphones, look away into space, or gather their children closer.

“Honey, stay away from the strange Writing Man.”

Anyway, all for now. See you next time!