Great news! My new story “Barabanchik” is out now in Sobotka Literary Magazine. You can pick up Issue 4 of the magazine here. 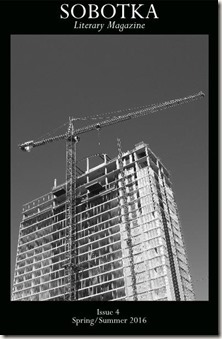 I’m happy because it’s my first story published this year. I won’t say much more than that, but will include the start of the story here, in the hope that it gets you hooked:

A man looks at the world and sees phenomena, perhaps self-contradictory in nature, and goes about trying to explain them. In ancient times, these explanations took the form of myth. Why do the seasons change, why does the sun set, why are people born, and why do they die? All these could be explained with the presence of gods, angels and demons meddling in the world of men.

The modern age is no different. Man, when confronted with the numinous and unknown, still fumbles around for a deeper meaning behind the shifting shadows. But he no longer has recourse to the old, familiar cast of supernatural beings. In their place, he must find new explanations to the mundane absurdities and sudden horrors of this world.

The following story is a recollection of just such a phenomena. It happened not long ago in Moscow…

For the rest, you’ll have to buy the issue.

Thanks for all the support for my writing from my friends, my family and the extended “kin” I’ve met via the blog. And to Sobotka for picking up the story! I couldn’t do it without you guys.

4 thoughts on “My New Story Is Out in Sobotka Magazine”