Last week, I strolled into Bookman, a used bookstore I used to frequent back in the day. Thankfully, it hasn’t changed a bit (unlike the lately and dearly departed Acres of Books, a favorite of Ray Bradbury). At any rate, I picked up a number of good books there, including a short biography of Orson Welles 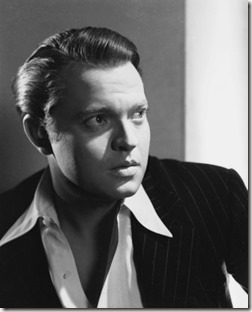 As a kid of the 80’s, I don’t know much about Welles. I remember being introduced to his work in an album about the Apocalypse, which I now think was an audio recording or soundtrack of the documentary, The Man Who Saw Tomorrow. I tell you, for a young kid, listening to Welles recount the prophecies of Nostradamus with all the lights off was creepy stuff.

I have only seen one of his films, Touch of Evil on the recommendation of a friend and it was good as far as it went. But after reading the biography, I’m going to have to make a point about seeking out more of his stuff.

Coming to Hollywood as a young man, he was given total creative control over his first film, Citizen Kane. But after that, things changed (for various reasons, not least Welles’s talent for alienating the people with the money) and Hollywood execs let it be known they wanted more control. Unfazed, he decided he didn’t need the studios. He would just make money as an actor and then roll that into his next independent production in which he would retain creative control. As Taylor notes, it was almost unprecedented at the time.

“…This was Welles’s normal way of financing his own creative ventures, and even then, when he was a very well-known actor much in demand, it seldom worked out very well…in Hollywood in 1942, at the height of the studio-factory system, it was a very eccentric way indeed of proceeding.”

Welles struggled with the same thing most artists do: How do you maintain control over what you create? How do you find the money to allow you to create what you want, how  you want? Orson found his solution: Use the funds from his acting, his voiceover work, hell, even commercials (for wine and frozen peas) to subsidize what he loved to do: make movies.

For me, it’s not that different. I’m not a great actor or pitchman. I have a 9-to-5 job like most of you out there. It’s a fine job and it pays the rent and helps with lots of other things. But most importantly, it gives me the work-life balance I need to put everything aside (including financial worry) every now and then and just write. Every creative person has to find that thing that will support them and allow them to create unhindered, unedited and without constraint. I’m glad Orson found his way and it’s nice just knowing that others out there have had to do the same thing to make ends meet.

What about you? Are you a writer? Or creative type? How do you find the funds to do what you do? Feel free to share in the comments section below.

PS…The Wellesnet website has some great clips of Orson Welles from throughout his career. The site also has a look at the recent celebrations marking 100 years since his birth. See you next time!