I didn’t discover Christopher Marlowe until a couple of years ago. I had heard his name vaguely related to Shakespeare and didn’t think much more of it. I guess I felt another playwright full of “thees” and “thous” wouldn’t be my thing.

But one day, I was in one of my used book store haunts and “Dr. Faustus,” one of his plays, caught my eye. The play begins with a chorus focusing on the Doctor:

And glutted now with learning’s golden gifts,
He surfeits upon cursed necromancy;
Nothing so sweet as magic is to him,
Which he prefers before his chiefest bliss:
And this the man that in his study sits.

The action cuts to Dr. Faustus sitting in his study where he rejects the professions of minister, lawyer and doctor one after the other, finally settling on becoming a “magician.”

These metaphysics of magicians,
And necromantic books are heavenly;
Lines, circles, scenes, letters, and characters;
Ay, these are those that Faustus most desires.
O, what a world of profit and delight,
Of power, of honour, and omnipotence,
Is promis’d to the studious artizan!
All things that move between the quiet poles
Shall be at my command: emperors and kings
Are but obeyed in their several provinces;
But his dominion that exceeds in this,
Stretcheth as far as doth the mind of man;
A sound magician is a demigod…

I was hooked. Here was a guy writing BEFORE Shakespeare that had way more interesting subject matter. I read through the play that day and ended buying his collected works (always a sign a writer has hooked me) shortly thereafter.

Like most high school students in the U.S., I had to read Shakespeare and he’s a fine writer, there’s no doubt. But my personal tastes are much more in line with the mercurial Marlowe. In honor of that obsession, here are five reasons that Marlowe is a better writer than Shakespeare.

He was the original literary Bad Boy.
Marlowe lived a life full of intrigue, daring and adventure. He was a probably a spy for Elizabeth II, was accused of counterfeiting, was party to a deadly brawl in 1589 and was a free-thinker/atheist at a time when it was a serious criminal offense.

I always imagine him pulling up on Harley (can’t I throw in anachronism?) with a girl (or two) on the back, lighting up his tobacco pipe (Sir Walter Raleigh was the one who introduced him to the new vice), ordering an ale and warming up for a long night of carousing with the lads.

Shakespeare? Not so much. He was listed as arranging a marriage in a lawsuit. He lived in London while his wife remained in Stratford and gave her his “second-best bed” in his will. If that’s not love, what is? He also bought some farm land and an apartment in London as his literary career took off. An alderman’s son who did well for himself. Like Balzac, he seems to have lived a sedate life and saved all his passion and verve for his writing.

He died young under mysterious circumstances.
Marlowe died at 29, stabbed to death in a brawl in a tavern or countryside inn. The three characters with him at the time were various assorted conmen loosely connected to Elizabeth I’s spymaster, Francis Walsingham.

The official inquest said that there was a dispute over a bill and that in the ensuing struggle, Marlowe was fatally stabbed. But an air of mystery has always hung over his death especially since the only witnesses were the aforementioned con men.

Shakespeare lived until middle age, apparently putting down his pen for the last three years of his life. Marlowe burned out, while Shakespeare slowly faded away.

He had compelling, original subject matter.
Shakespeare was a great writer, don’t get me wrong. But the guy didn’t have an original idea in his head.

Shakespeare was the rewrite man Hollywood can only dream of. Give him Plutarch’s 80-page essay on Mark Antony and he’ll give you the 3,500-line tragedy “Antony and Cleopatra”. He was unencumbered by modern anxieties of originality, only inventing the plot for “The Tempest” and one or two others.

Shakespeare would have had a hard time making it as a writer today. I could just see editors saying: “But we’ve heard this story a thousand times, Bill! What’s original here?” Bill then would have to explain the story isn’t always in the idea and plot, but the telling. It’s not exactly what an editor wants to hear.

Marlowe on the other hand, while sourcing his ideas from historical figures and older tales,  had an original streak. His play The Jew of Malta is an original story. Dr. Faustus is the first dramatic work based on the Faust legend. And Edward II was, apparently, one of the very first historical plays in English.

He cut the path for Shakespeare to follow.
Name almost any genre and it was Marlowe (and a few others) who brought it to the English stage first. Historical drama? Marlowe wrote Edward II. A hubristic protagonist who sows the seed of their own destruction? There’s Doctor Faustus. A play with a distant and exotic setting far from England? You have Marlowe’s Tamburlaine the Great. What about excessive blood and gore? Just count the murders and bodies piling up in The Massacre at Paris.

Marlowe threw down one challenge after another: “The Jew of Malta”, “Dido Queen of Carthage”, “Edward II”, “Dr Faustus” and “Tamburlaine Pts 1 & 2”. Shakespeare responded with “The Merchant of Venice”, “Antony and Cleopatra”, “Richard II”, “Macbeth”,  “Henry IV Pts 1 & 2” and “Henry V”.

Oh, and the use of more realistic blank verse instead of rhyming lines in drama? That was a Marlovian innovation too. The only genre where Shakespeare excelled and Marlowe didn’t, was comedy.

He was a bad poet. 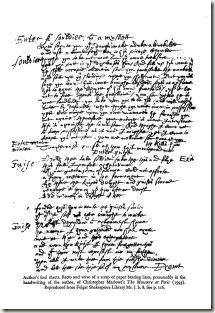 As a prose writer,  poets have always struck me as odd creatures. They seem more like they’re closer to musicians than they are to us prose writers. Maybe it’s just jealousy on my part, but I usually tend to steer clear of them.

And here’s where I find Marlowe still more charming: he was an atrocious poet. Here’s one of his better known poems, The Passionate Shepherd to his Love:

There I will make thee beds of roses
And a thousand fragrant posies,
A cap of flowers, and a kirtle
Embroider’d all with leaves of myrtle;

Not quite doing it for me. Well, what about Bill? He seems to have had a natural aptitude for poetry. Take his well-know sonnet 116:

Let me not to the marriage of true minds
Admit impediments. Love is not love
Which alters when it alteration finds,
Or bends with the remover to remove:

Not too shabby. But somehow, the fact that Marlowe was a second-rate poet makes me love him even more. But then again, what would you expect? I’m a bit biased.

If you want to learn more, the Marlowe Society is a good place to start. They have information on the playwright, host events and have a newsletter. They also host a similar event to the Poe Toaster, when they lay a wreath at his grave in Westminster Abbey. The next wreath-laying is this Nov. 22, if you’re in London that day.

Also, they have a post on why that picture of Marlowe above is most likely a fake.